75th Anniversary of the Battle of Monte Cassino 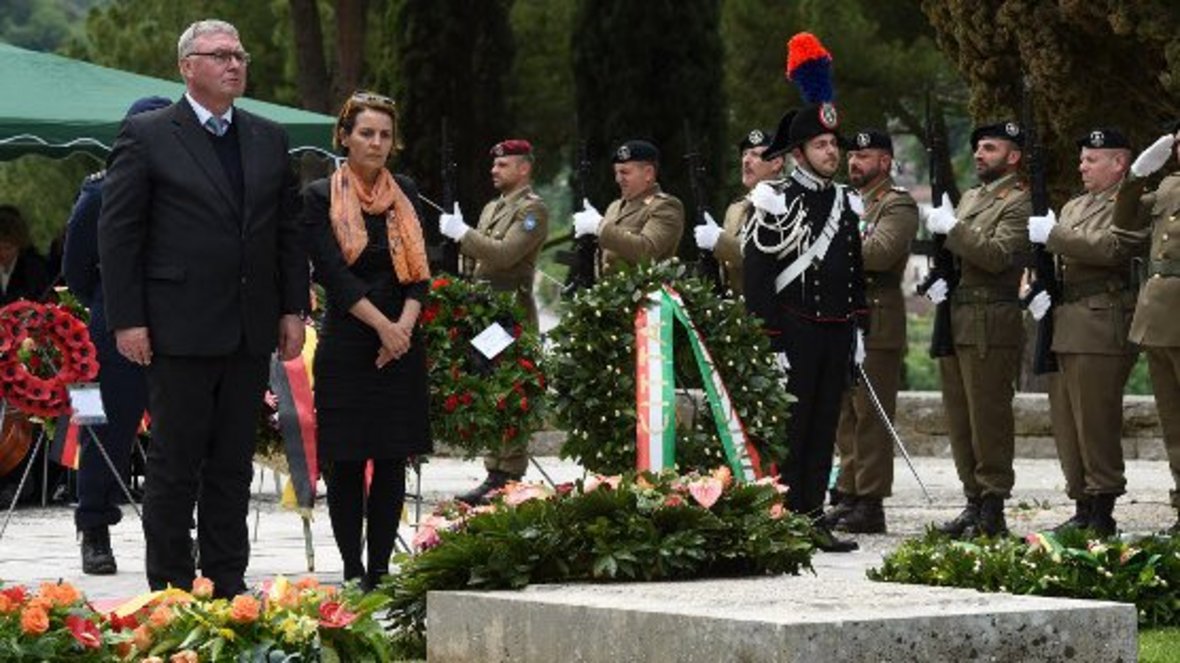 Monte Cassino, 18 May. The hills are shrouded in mist; the trees, which glow a particularly vivid green against the grey sky, drip with water. Here at the foot of the Abbey of Monte Cassino, some 400 people from all over the world have come together to remember those who, in this idyllic place, gave their lives in a horrendous battle 75 years ago. It is estimated that over 20,000 Wehrmacht soldiers and approximately 55,000 Allied soldiers perished, while the number of fatalities among the Italian civilian population reached the thousands.

From January to May 1944, heavy fighting raged for the hill and its abbey. The Gustav Line, which the German Wehrmacht troops had drawn from one side of the country to the other, was intended to hold up the Allies’ march on Rome. No German soldiers were stationed in the abbey itself as the Wehrmacht had established a neutral zone extending for 300 meters around the abbey complex, but the Allies suspected a ruse. On 15 February 1944, the abbey was bombed by Allied forces. Five hundred tonnes of high-explosive and incendiary bombs fell on the abbey, reducing it to rubble. Especially tragic is that hundreds of Italian civilians had sought refuge in its buildings. The bitter fighting lasted until 18 May 1944, when the defeated Wehrmacht troops withdrew.

A special role was played in the taking of the abbey hill by the Polish 2nd Corps under General Władysław Anders. Anders had come to Italy, after many a detour, with a large number of exiled Polish soldiers in order to fight for the liberation of Europe, and above all Poland, from the National Socialists. He and his soldiers of the “Anders Army” conquered the hill and its monastery in a week of heavy fighting. This explains why many Poles still make the pilgrimage to Monte Cassino today. On 18 May this year even the Polish and Italian presidents, Andrzej Duda and Sergio Mattarella respectively, visited the Polish military cemetery.

More than 20,000 German soldiers are buried in the German military cemetery in the district of Caira. Here too a commemoration took place on this day, taking the form of an international act of remembrance for all the dead of this war. Relatives, veterans and numerous delegations all travelled to this event commemorating the Battle of Monte Cassino 75 years ago. Floral wreaths from the embassies of New Zealand, Australia and the United States brought home the enormous geographical impact of the Second World War. In this sense, Monte Cassino can be seen as a microcosm of the far-reaching consequences and tragedy of the Second World War.

In his welcome address, Dr. Benedetto Basile, deputy mayor of Cassino, stressed the futility of war. “In this war there were no winners or losers. The only loser was humanity. Our lives must be guided by the lessons of history.”

Annette Walter, envoy of the Federal Republic of Germany in Italy, called for commemorative events such as this not merely to act as a history lesson but for remembrance to become a reality in our everyday lives.

Archabbot Donato Ogliari (OSB) of Monte Cassino quoted the words spoken by Pope Pius XII on 24 August 1939 in the face of the looming war: “It is the power of reason rather than the power of arms that brings justice into the world... In peace nothing is lost. In war all may be lost.” The archabbot pointed out that the inscription “PAX” had survived the devastation caused by the bombing of the abbey. Today the inscription takes pride of place above the old entrance to the abbey – by way of a promise and a warning.

Detlef Fritzsch, a member of the national committee of the Volksbund, warned of the dangers of glorifying battle and solders’ deaths. “In this place, where people died in their thousands, we acknowledge the value of life.” Monte Cassino, he continued, is of special significance in the commemoration cultures of many nations. “Thus we stand here not only in a place in which families from virtually the whole world mourn the loss of their relatives, but also in a region in which a new era was inaugurated. And this gives Monte Cassino a European dimension.”

This European dimension also became clear when three young Volksbund youth meeting participants reported on their experiences. Wolf-Kristian Ripken spoke of celebrating his 19th birthday during the last work camp. “On the day of my birthday I sat by the grave of a lance corporal who would have been 18 on the same day 74 years before. ... I no longer felt history to be remote or abstract. It lay before me in the form of the grave of an 18-year-old youth. Never before have I experienced such sadness but at the same time been able to get so close to history. I could feel it as I went over the inscriptions on the headstone.”

Rosa Sobotta revealed what she had got out of her work camp experiences: “Peace in Europe is not preordained, a given; it needs to be cultivated and worked at over and over again. It is the responsibility of each and every one of us to do what we can to promote peace, fundamental democratic values and humanity. To ensure that there are no more war graves in Europe.”

The ensuing Lord’s Prayer, in which those present were led by Evangelical military bishop Dr. Sigurd Rink and the archabbot of Monte Cassino, Donato Ogliari (OSB), were intoned in many different languages, once again underlining the international nature of this act of commemoration.

Following the laying of wreaths, the trumpeter’s lament and the German and Italian national anthems, the event closed with a reception given by the Volksbund. And yet the event was not really over because further remarkable encounters took place here – between the delegations of different countries, between veterans and family members, between individuals young and old from very different regions. People who had never before met each other discovered by chance that their grandfathers were acquainted, names were exchanged and memories evoked. Tears of emotion flowed but at the same time contact details were given out, there was laughter, arrangements were made and future meetings planned. And from time to time the sunlight burst through the trees. Many agreed that it was a successful event, one full of dignity but also full of emotion. And can there be any better ending to a commemorative event in an almost mythic setting than for the children or grandchildren of the war dead to meet and find they can understand one another? 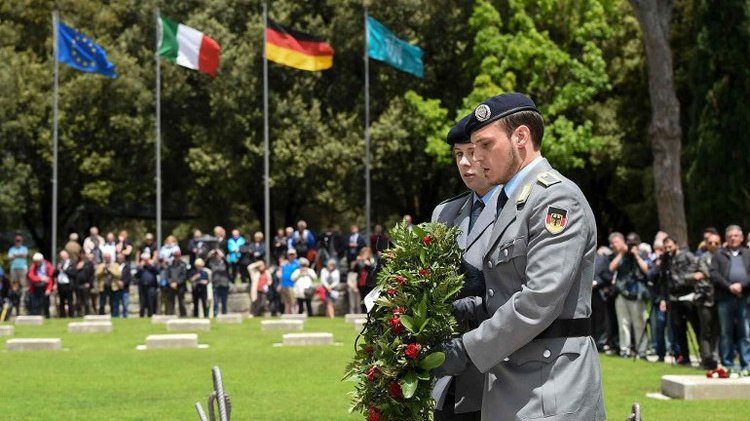