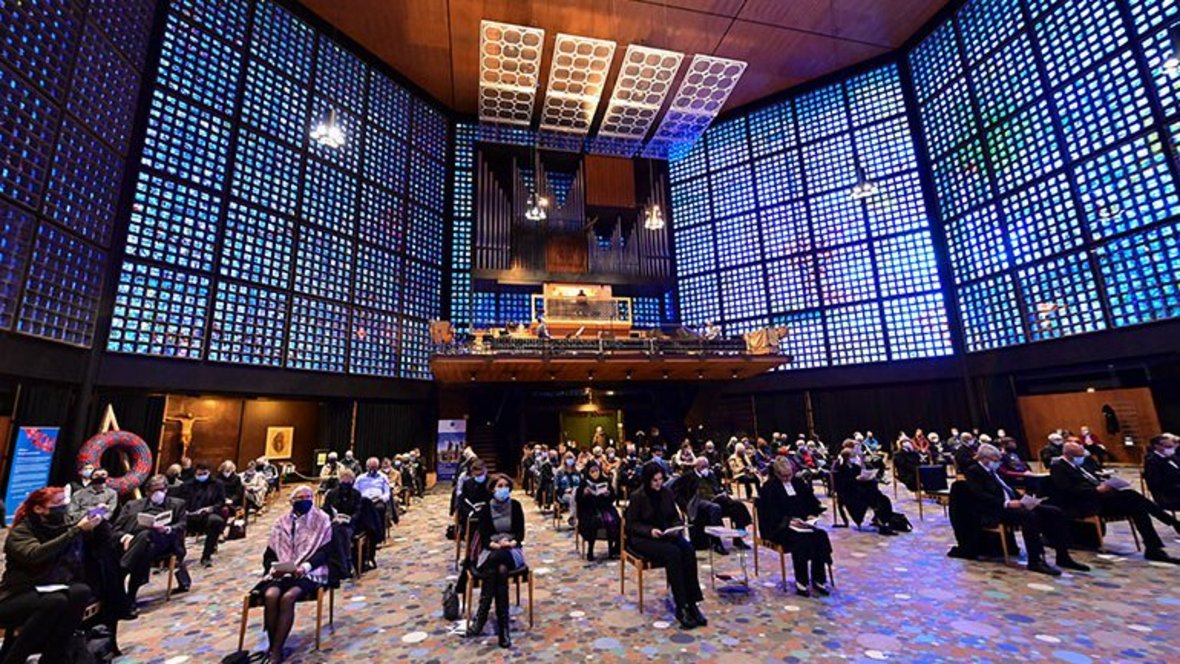 Destroyed churches in destroyed cities – this is something Berlin and Coventry had in common in the Second World War, and in both places the ruins continue to bear witness today. To make reconciliation a tangible reality is a shared aim that has united the two cities for many years. The service in Berlin’s Gedächtniskirche (Kaiser Wilhelm Memorial Church) demonstrated just how strong the bonds of reconciliation are and the extent to which a responsibility for peace is still growing out of them today.

The theme of the service, which for the first time was organised jointly by the Volksbund Deutsche Kriegsgräberfürsorge (German War Graves Commission) and the Evangelical Gedächtniskirche community, was the inscription on one of the church’s bells: “Your cities lie in ashes”. Due to the Corona virus, the traditional memorial concert in the Berlin Cathedral had to be cancelled. Dr. Fritz Felgentreu, member of the German parliament and president of the Volksbund’s Berlin branch, gave thanks for the “refuge”, for open doors on this day.

The Dean of Coventry, John Witcombe, spoke to the approximately one-hundred-strong congregation not live but by video. This was also a consequence of the pandemic regulations. Standing in the cathedral ruins, he recalled what the then provost Richard Howard had said immediately after the German bombing raid on this day 80 years ago: “Father forgive.” “What became here an act of destruction somehow, by the grace of God, became the beginning of a great movement of reconciliation.” In 2013, when visiting the Gedächtniskirche for the first time, Dean Witcombe discovered how strongly this movement can be felt in Berlin. The church has become one of many Cross of Nails Centres worldwide.

With reference to the Cross of Nails, the symbol of the peace movement that radiated from Coventry, Reverend Kathrin Oxen spoke not only of a “moving and unique story of genuine reconciliation” but also, and arising from it, “admitting our historical guilt and responsibility.” “The broken past” remains on view; the memory of it is visible and tangible in the ruins. However, with his gesture of reconciliation in 1940, Provost Howard reliably and enduringly extinguished the blaze of hatred and revenge despite the fact that his message met with little response in the thick of war. And it remains true today that “Reconciliation is a task of generations. The wounds of the past can heal but the scars remain visible.”

And scars were also mentioned by Fritz Felgentreu in recalling not only the victims of war and tyranny both then and now but also the “human cruelty of the present day.” This is also symbolised by the Gedächtniskirche in Berlin: on its steps on Breitscheidplatz are immortalized the names of the victims who lost their lives in a terrorist attack on 19 December 2016.

When the weapons stop firing, silence takes their place. Reverend Oxen spoke of this silence too: “One thing we have understood is that everyone is a loser in war, even the victors.” In her prayers she urged us not merely to endure this silence but to fill it and to seek in it a life in peace.

The genuine quest for peace and reconciliation was also symbolised by the presence in the Gedächtniskirche of the steel wreath of a thousand flowers, which came into being within the context of the Volksbund’s “Forget-me-not” campaign. The wreath is composed of forget-me-nots and poppies, with which the war dead of respectively Germany and the Commonwealth countries are remembered. Enduring flowers screwed tightly into place – a “wonderful idea for the German-British culture of remembrance”, emphasised the pastor. After all, what was it a child said when asked what the name of the “Blue church in Berlin” was? Kathrin Oxen provided the answer: “the forget-me-not church”. “May this forget-me-not blossom and thrive in this place.” 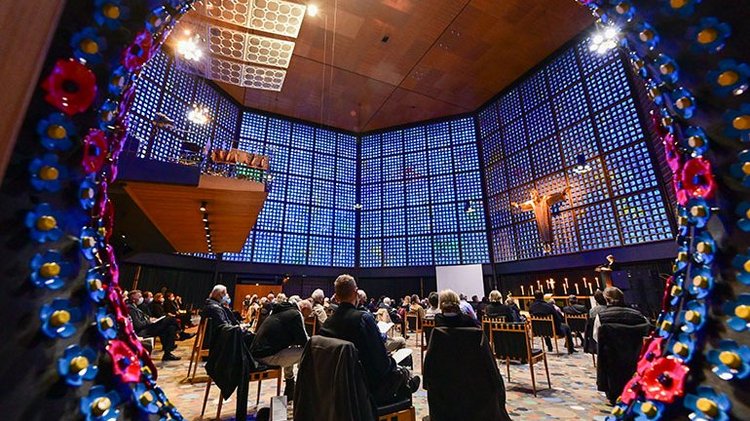